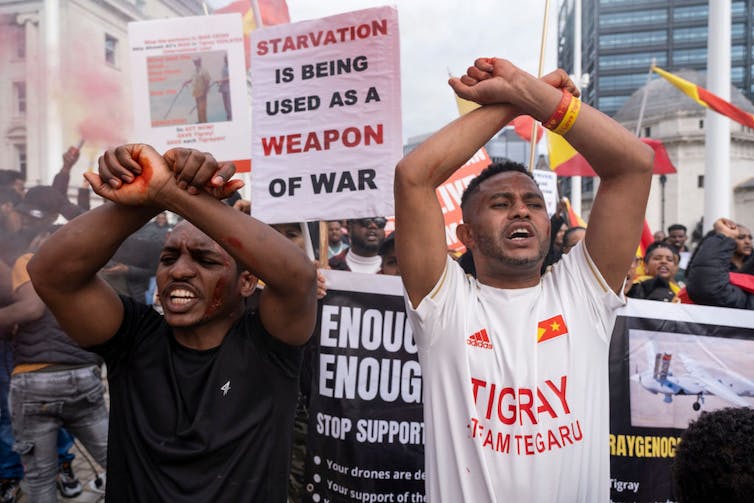 Protesters in the UK demonstrate against the war in Tigray, Ethiopia, in October 2022.
Mike Kemp/In Pictures via Getty Images

The Ethio-Tigray war started on 4 November 2020. For almost two years, the governments of Ethiopia and Eritrea – along with Amhara regional forces and militia – have waged war against Tigray’s regional government and society.

Tigray is a tiny ethnonational group that makes up about 6% of Ethiopia’s population of 121 million. Yet, it has been able to hold off well-armed military forces.

As a sociologist who has written extensively on the cultures of nationalism in the region, I have studied the deep and complex roots of this conflict. I believe that understanding its history is key to comprehending how Tigray has developed the resolve to hold off a far greater military might than its own.

Neither the leaders of Ethiopia and Eritrea nor those of Tigray accept the principles of compromise, peaceful coexistence or equal partnership. According to their political cultures, winners take all. It’s zero-sum politics.

Abiy Ahmed, Ethiopia’s prime minister, congratulated his army and allied forces for what looked like a quick victory.

However, the Tigrayan Defence Force made a tactical retreat. Its troops moved to rural areas and used guerrilla operations supported by war veterans. This strategy demonstrated Tigray’s effective fighting force, which was first developed in the 1970s.

As a result, eight months after the start of the war, Tigrayan troops returned to their capital. The Ethiopian army retreated from Mekelle and other cities.

Tigrayan troops then invaded the neighbouring Afar and Amhara regions, and almost made it into Finfinnee (Addis Ababa) in November 2021. However, they soon retreated to their region.

Since then, Tigrayan forces have controlled and administered most of Tigray.

The Ethio-Tigray war has been devastating for Tigrayans. They have faced mass killings, military bombardment, rape, looting and the destruction of property. The conflict has denied them access to food, electricity, telecommunications, medicine, banking services and other necessities.

Yet they support the Tigray Defence Force. To understand why requires a deeper reading of Ethiopia’s history.

Two Amhara emperors and one Tigrayan emperor laid the foundation of the modern imperial state of Ethiopia. The first emperor of Abyssinia/Ethiopia was Tewodros (1855-1868). He was followed by Yohannes IV (1872-1889) of Tigray and then Menelik II (1889-1913).

Under Menelik II, the Amhara state elite replaced Tigray’s leaders. They made Tigrayan society a junior partner in building the Ethiopian empire.

But Tigrayan nationalists believe their society was the foundation of the Ethiopian state.

In the last decades of the 1800s, the Ethiopian empire expanded from its northern core of Tigray and Amhara by colonising the Oromo and other ethnonational groups.

It established slavery, the nafxanya-gabbar system (semi-slavery) and the colonial land-holding system by taking the land of conquered people.

The nafxanya (gun-carrying settlers) elite – led by the Amhara – dislodged the Tigrayan elite from Ethiopian state power. Tigray was pushed to the periphery of an Amhara-dominated society. This created political rivalry between the two groups.

The status and living conditions of the Tigrayan elite and people deteriorated. This, along with several wars in the region, aggravated political, economic and social problems.

Accumulated grievances and many forms of resistance produced the Tigray People’s Liberation Front in 1975. It aimed to liberate Tigrayans from Amhara-led governments. This helped develop Tigrayan nationalism.

The second is Tigrayan Ethiopianism. This theoretically maintains Ethiopia’s current geopolitical boundary, with its decentralised political structures where different population groups have some autonomy.

The Oromo expressed their collective grievances with this political arrangement through the struggles of the Oromo Liberation Front. The Qeerroo/Qarree (Oromo youth) movement got involved between 2014 and 2018. This eventually dislodged Tigrayan leadership from Ethiopian central power in 2018.

Abiy was a member of the Oromo People’s Democratic Organisation, a subsidiary political party of the Tigray People’s Liberation Front. The Tigrayan Front, alongside its allied organisations, elected Abiy as Ethiopia’s prime minister in April 2018. He later turned on his support base.

Once he came to power, Abiy and his allies believed they wouldn’t stay in control if they did not destroy Tigrayan and Oromo nationalists. These were symbolised by the Tigray People’s Liberation Front, the Oromo Liberation Front and the Oromo youth movement.

The Amhara elite dominated Ethiopia from 1889 to 1991. The Tigray People’s Liberation Front overthrew them in 1991.

The wealth and experience Tigrayan elite accumulated over nearly three decades increased their national organisational capacity. This has helped them in the current war.

The Oromo have rejected the dominance and tyranny of both these groups. They have carried out their liberation struggle.

Abiy and his Amhara collaborators are fighting Tigrayans, Oromos and others to control Ethiopian state power. Their winning the war in Tigray and Oromia would allow the Abiy regime to continue a modified version of Ethiopia’s pre-1991 policy.

For Tigrayans, losing this battle would be equivalent to losing political power and returning to victimisation, poverty and the threat of annihilation.

Given their complicated political history, reconciling the central government and the Tigrayan regional government is challenging. Even if these two groups negotiate a peace deal, conflict will continue if the Oromo are left out of the process.

If Tigray and Oromia’s political problems aren’t correctly understood and resolved, conflicts will continue until the collapse of the Ethiopian state.

Asafa Jalata, Professor of Sociology and Global and Africana Studies, University of Tennessee

This article is republished from The Conversation under a Creative Commons license. Read the original article.