Our mission is the creation of a learning environment that emphasizes the theme of Social Justice. Through coursework and research in the interest areas of criminal justice, environmental issues, and political economy and globalization, students will develop an understanding of everyday social behavior as well as the structural factors that contribute to social injustice. From the seminar room and the field, students also acquire both the intellectual tools to critically analyze social phenomena and trends, and the methodological tools to conduct research, to evaluate social policy.

While we provide a broad perspective on sociology as a diverse field of inquiry, including theory, quantitative and qualitative methods, demography, social psychology, and philosophy of social sciences, faculty research is centered around three major areas: 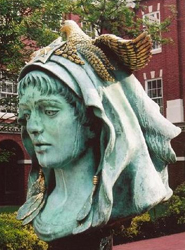 Political Economy and Globalization faculty analyze the political and economic foundations of change in global society, examining contemporary issues in the context of large-scale and long-term historical shifts to understand continuity and change in global society and local communities.  Instruction is provided in the sociology of development, and political, economic, and social institutions and categories such as classes, the state, race and ethnicity, gender, markets, and social, nationalist, and revolutionary movements.

*Note: The photo shows Audrey Flack's sculpture, The Beloved Woman of Justice. The sculpture is displayed in the courtyard of the Howard H. Baker, Jr. Federal Courthouse in Knoxville, Tennessee (formerly known as the Whittle Building). The photo was taken by the webmaster in fall 2006. According to an article by Dolores Klaich posted on Audrey Flack's web-site (under Text, "Artist was "Tuned in'"), "every Cherokee village had an elder woman known as the beloved woman. She took part in local and national councils on all subjects and had the ability to persuade tribal members in making important decisions, particularly in rendering justice." According to a plaque posted next to the sculpture, "the star and eagle on her head are symbolic of the United States and the ideas of justice, righteousness, and integrity. The expression of the face is meditative, pensive, and thoughtful, and is meant to inspire feelings of solace and reassurance.... The facial features of the sculpture are meant to appeal to a broad and diverse group of people and represent the impartiality of the court."